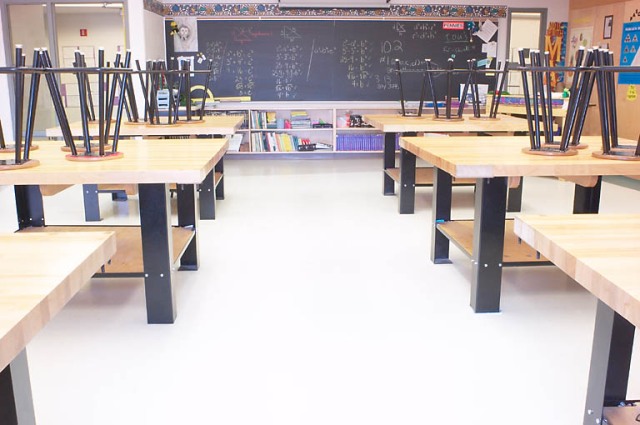 Stafford County School Board members will be meeting tonight to vote on whether or not to cut the budget on plans from their Capital Improvement Plans for Fiscal Years 2008-2013.  The Board was asked by the County Board of Supervisors to trim their current budget by 30%.  In an effort to do so, the Board Members have tentatively agreed to put plans on hold for the new high school slated to be opened in 2010 in the southeast portion of Stafford County (22405).

The data is as follows according to the Capital Improvement Plan for Fiscal Year 2008-2013:

Actual enrollment numbers as of today, 9/24/2007, were as follows according to each of the Stafford County High Schools:

Because of recent changes in the housing market and a slowdown in building permits, David E. Sawyer, Ed. D., superintendent of Stafford County schools, has recommended putting plans for the county’s 6th high school on hold until 2015.  While the land has already been acquired in the area of Leeland Station and Clift Farm, the county does not see an immediate need based on data received through the University of Virginia.

According to a report from the Stafford Sun, “The schools system, which has seen a $12 million shortfall in the last budget, was asked by the board of supervisors to cut its capital improvement budget by 30 percent. Aided by slowing enrollment numbers, the schools system’s superintendent David Sawyer, and his staff came up with a plan to cut it by more than 45 percent.

At the school board meeting last week, Sawyer recommended the suspension of building a new high school in the southern end of the county as well as new elementary and middle schools. Renovation plans for several other schools were also readjusted.

Sawyer also noted the “expansion of existing plants as opposed to building new schools based on what our forecasts show.”

A report from the Weldon Cooper Center for Public Information published August 2007 through the UVA, was used to determine trends and forecasts for state and local school enrollment changes from 2007 to 2011.  One striking factor taken into account for Fairfax and Prince William Counties but not for Stafford County was the forecast predicted for change in military presence affected by BRAC by 2010.

However, no such changes were factored into Stafford County’s projections.  The study did not take into account that Quantico Marine Base, with 33,000 acres in the northern portion of Stafford, accounts for 21% of all of Stafford County land.  It is my opinion that it is highly likely that BRAC repositioned in Ft. Belvoir, Quantico, and Dahlgren Naval Base in King George will have a subsequent positive impact in the number of families moving into Stafford County.  However, for whatever reason, this distinct possibility was not apparently taken into consideration.

A report by the Center for Regional Analysis sites the following:

The conclusion of this study identified the following 10 major factors:

1. The vast majority of the jobs being relocated to Fort Belvoir and Quantico are already held by workers living within a relatively easy commuting distance of the two installations.

2. The Fort Belvoir, Quantico, and Bailey’s Crossroads relocations’ net impact on the greater Washington area will be slightly negative and will especially impact workers living in Maryland.

3. The solutions to addressing worker transition needs must be undertaken in collaboration with other entities in the Washington National Capital region.

4. The likely impact on housing needs will be greatest on Prince William and Stafford Counties, but these impacts will represent only a modest portion of overall growth trends.

5. The largest impact on area school enrollment will be in Prince William and Stafford Counties, but the impact will likely pale in comparison to general growth trends.

6. The first impacts from the BRAC will be seen during the construction phase at Fort Belvoir and Quantico.

7. The great demand for construction trades workers is likely to exacerbate existing shortages in certain occupations.

9. The amount of spin-off impacts in retail and consumer services is also expected to be relatively small.

Also, currently, the numbers used to assess capacity levels by the Planning Department of Stafford County Schools is based on design capacity.  In other words, the 1800 capacity level for 4 of the 5 high schools represents actual seats per classroom.  According to Scott Horan, there is discussion by the superintendent of schools to use an operational capacity number in the future that will more accurately reflect the true capacity of the school.

For example, consideration must be given for children in special education classes or dual enrollment classes who may only occupy 10 seats per class.  The discrepancies for these variances are not currently being represented by the current design capacity numbers and are therefore not indicative of the actual need for more classroom space.

While it is the intention of the School Board to vote to cut the budget by holding off on the plans for the new high school, among other things, it is not to say annual reviews will not be conducted.  According to school officials, when asked specifically if this issue would be readdressed annually, the answer was yes.  It appears to be the school board’s intention to continue to keep funds in the budget to pick up the project again if the need arises before 2015.

Determining the need is a subjective analysis and as a mother of 2 former Stafford County high school graduates and 1 Stafford County high school senior, the need, as far as my family is concerned, is already here.  Students who cannot navigate their way to class between bells because of overcrowded hallways or who cannot finish lunch because they cannot get through the lunch line before they have to head back to class, are facing issues we need to correct now.  But this is just one resident’s opinion.

Working primarily as a referral agent, my main motivation is to be able to provide you the highest possible level of service as you look to buy or sell your home in the Northern Virginia Real Estate market. You should be so impressed with your service that you will feel compelled to refer me to your family, friends and colleagues. Our time together is always well spent meeting your specific needs because my time and effort is not spent looking endlessly to generate more business. As a Buyer's Agent, the buyer's criteria becomes paramount during the home buying process. Your needs will never be compromised because Dual Agency is not something I participate in. This is a distinguishing characteristic from many in the industry and I stand firm in the belief that no client in a transaction (whether a buyer or a seller) should be without 100% representation. You deserve all the loyalty and attention from an agent who will always have only your best interests in mind. Keeping in mind that Northern Virginia is a highly transient area, I am always privvy to sales reports and market analysis of all the surrounding counties from Alexandria/Arlington to as far south as Richmond County and from east on the Potomac and Rappahannock Rivers to the Shenandoah (and all points in between!). Between the military, corporate, and government relocations, having an agent working to provide you with the latest statistical information and market trends is imperative to a successful sale or purchase. Also, as an e-Pro, finding you homes and communicating that to you becomes increasingly efficient, as does marketing properties for sale. Using exceptional photography for virtual tours, staging all listings, and incorporating "out of the box" methods to generate the largest number of buyer leads while Marketing Your Property For Sale, I can save you time, money and frustration. Start your search for homes at http://www.IreneMoralesWard.com!
View all posts by Quantico Homes →
This entry was posted in Stafford County Homes, Stafford County Schools, Uncategorized and tagged High Schools, quantico, real estate, Stafford Area Information, Stafford County, Stafford County Public Schools. Bookmark the permalink.